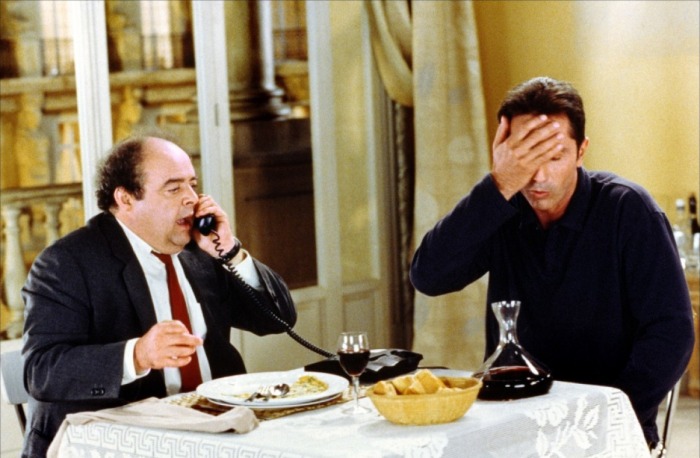 Le Dîner De Cons’ delights aren’t ‘cinematic’ – the real joy of the film lies in its bravura illustration of how to lead your characters through an absurd tale while making every action and reaction feel credible; and the belly-laugh comedy drawn from character and dramatic irony.

Francis Weber’s Le Dîner de Cons was subsequently remade as Dinner for Shmucks, which I haven’t seen, but sadly, the latter looks unlikely to match the charm and wit of the French original…

If you don’t want to know what happens in Le Dîner De Cons, don’t read on. Bookmark this page. Go and rent the film, buy it, watch it, enjoy it – and then come back to this blog, don’t let me spoil the fun for you. Go away…

Right, for those of you who have seen the film – a quick reminder of the story:

Le Dîner De Cons tells the story of an affluent publisher who regularly attends a ‘dinner for idiots’ where he and his friends compete to bring the most foolish ‘idiot’ as a guest. Tonight, his wife has had enough of his cruel humour and leaves him. Frustrated, he does his back in just as his ‘idiot’ arrives, eager to help…

Within a couple of hours the ‘idiot’ helps destroy the businessman’s marriage, offend his mistress, and get him a tax audit – by inadvertently revealing truths. Unable to approach the world honestly, the duplicitous businessman is hoisted by his own petard…

So other than having an enjoyably absurd story, what is it I particularly liked about this script? Well…

IT PLAYS TO ITS STRENGTHS

If your film’s action is mostly static, more akin to a theatre piece, what qualities justify its life on screen?

Le Dîner De Con is as static as a play – in fact, it was an adaptation of one, and this shows in its construction. In spite of this, it works. It knows its own strengths (see below) and plays to these.

Le Dîner De Con is an odd length at 76 minutes, but again, that’s the right length for the story. While you would still struggle to get a feature film made at that length in the UK, that’s not true of France.

Apparently the US remake attempts to move away from the film’s more static character-based ‘farce’ format to craft a longer story, with more locations, broader external character development, and a longer time span. But in doing so, it loses what makes Le Dîner de Con successful – it’s engaging lightness of touch; and understanding of how to tell its story best.

TWO CHARACTERS, EACH WITH A STRONG DESIRE

In your two-hander, what light does each character shine on the other? Does each have a satisfying journey of their own, even if they are pursuing a similar aim? How are they alike and unlike?

The film follows two main characters (the businessman and the idiot), each with a clear character journey.  They act as a counterpoint to each other – both experience great conflict, and both have a clear aim that carries them through the story. The businessman wants to get his wife back. The idiot wants to help him.

We like the idiot much more, and empathise with him as a good-natured victim trying to do his best. We delight in the businessman’s mishaps, but we also feel for him because he is experiencing so much conflict.

Ultimately, the idiot is the assistant to the businessman’s greater story aim, and thus the businessman is our protagonist, but the characters are yin and yang, one would not work without the other.

And does the businessman learn anything from his nightmare evening? Ultimately perhaps to make a real honest connection with someone else. A connection that might just allow him to make much-needed changes in his life, and save his marriage (or not…)

How are your characters responsible for creating their own challenges?

The plot cleverly piles on the obstacles and conflict, while retaining a satisfying sense that events are entirely generated as a result of the businessman’s own bad behaviour, despite his apparent charm and confidence.

It was his choice to have a ‘dinner for idiots’; and his inability to tell the truth, come what may, makes his situation worse every single time. While we aren’t conscious of this as we watch the film, this pattern is echoed to great comic effect throughout the story. Consequently, his come-uppance is delightfully just.

Where the businessman proposes lies or mottled shades of the truth, the idiot offers truth (inadvertently, while trying hard to tell lies…). As an example: the businessman wants to track down his wife through her ex – and asks the idiot to call him, pretending to be a book agent – the idiot plays a convincing agent but fails to ask about the wife. He tries again, but carried away with the success of his agent act, foolishly gives the businessman’s phone number as his own – thus exposing the businessman’s search to his ex-friend, the very man he stole his wife from.

While this is wonderfully embarrassing, it is also the idiot’s first inadvertent gift to the businessman – as the ex-friend sees that the businessman is suffering and gets back in touch.

What dark tragedy lurks underneath your comedy?

The best comedy often has a dark underbelly that engages us with the characters, and makes us laugh all the harder as an escape.

GREAT USE OF DRAMATIC IRONY

What does the audience dread, leading to a laughter-filled resolution…?

As for ‘technical’ delights, the script makes good use of set-ups and pay-offs –building comedic tension in a knowing audience.

When the businessman hides all his antiques and paintings, we feel sure he will be caught out – and it’s a delight when the taxman (rushing for the loo as a result of drinking the wine that the businessman has mixed with vinegar to hide the expensive vintage…) opens the wrong door to see all the evidence tumble out. That hoisted petard again!

Who knows what when? And how does that knowledge add to the comedy and dramatic tension?

An invaluable tool for gripping the audience, creating tension, and providing satisfying pay-offs, dramatic irony (where the audience and one/some of the characters know something another character does not) also plays a crucial part in Le Dîner De Cons’ success.

We know that the idiot has been invited to a ‘dinner for idiots’, but he is unaware of this until the very end. As a result we worry what will happen when he finds out. And we enjoy the businessman’s humiliation as the idiot blindly gets his own back, his innocence and apologies providing greater comedy.

All of this means that the ending is a delight.

A moving speech from the idiot demonstrates surprising wisdom. It’s a moment of honesty that reveals a key truth to the businessman (and to the audience) – that the businessman clearly loves his wife or he wouldn’t have gone through all this today.  This convinces the businessman’s wife, and us, that despite his many failings, he loves and deserves her.

And then just as we think have a sweet ending where the role of idiot and ‘wise’ businessmen have been swapped to good effect – the idiot then turns it on his head again, proving himself an idiot once more. Our laughter lasts longer than the idiot’s brief moment of wisdom.

Well, that’s my own brief moment of wisdom over. I’m sure there are many more wonderful observations to make, but as I’ve only watched it once, that’s my lot for now. If you’ve seen the film, I’d love to hear any other thoughts you might have on what worked well, or what you think was crafted by an ‘idiot’…

Image by Ian Schneider via Unsplash